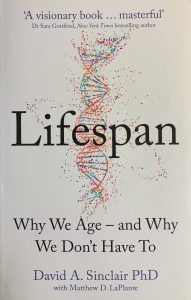 Health span is more important than longevity. Nobody wants the time of suffering from unbearable symptoms by various kinds of disease and aging. The book shows how to slow down aging. The author said aging is a disease, not a natural phenomenon. Death is unavoidable, though. But, he said, aging is preventable. 300 years ago, no one believe we can fly. Now it’s natural to use airplanes. Aging is the same. Most of the people think they should accept getting old and do not make efforts for anti-aging. The author’s opinion mainly based on experiments on mice and including his subjective notion, is, for anti-aging, take 1g of NMN(nicotinamide mononucleotide), eat less (skipping breakfast and lunch which is called as intermittent fasting), exercise like HIIT(high intensive interval training such as Tabata protocol), and enough sleep (7-8 hours). The problem is taking 1g of NMN every day. It costs at least 6000 yen per day according to my research on Amazon. And NMN is effective for anti-aging in mice, but is not proved right in human experiments so far. Keio University issued a paper about the safety dose of NMN in human, not remarking effectiveness. I head Washington University issued the paper saying no clear scientific evidence of NMN. My English teacher gave the book and said he and his wife felt difference before and after taking NMN. He insisted that he felt more energetic than before. His wife said her eyesight became better only after 2 weeks of taking NMN. It sounds very intriguing, but my decision is not taking NMN, not only because scientifically not proven in human yet, but because not reasonable.